Just another gastro – or is it?

A 30 year-old female presented to the ED with vomiting and diarrhea that began 4 hours ago. This was associated with crampy periumbilical pain. Her vitals signs were stable and she was afebrile. Her abdominal examination was benign, with no peritoneal findings and a negative Murphy’s sign.

After 1L of normal saline and gravol her symptoms have resolved and she wants to go home.

What would you do?

Based on the slightly elevated transaminases, a focused RUQ point-of-care ultrasound was performed.

In this clip, a gallstone is clearly visible in the body of the gallbladder. However, the wall was not thickened (<3mm) and there was no pericholecystic fluid. She was also not tender over the gallbladder (negative sonographic Murphy's sign). But can you see anything else abnormal? 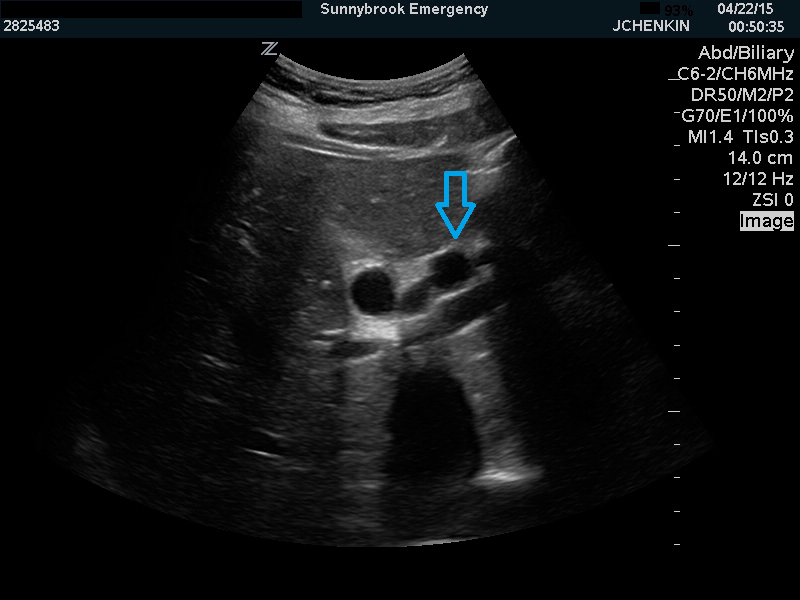 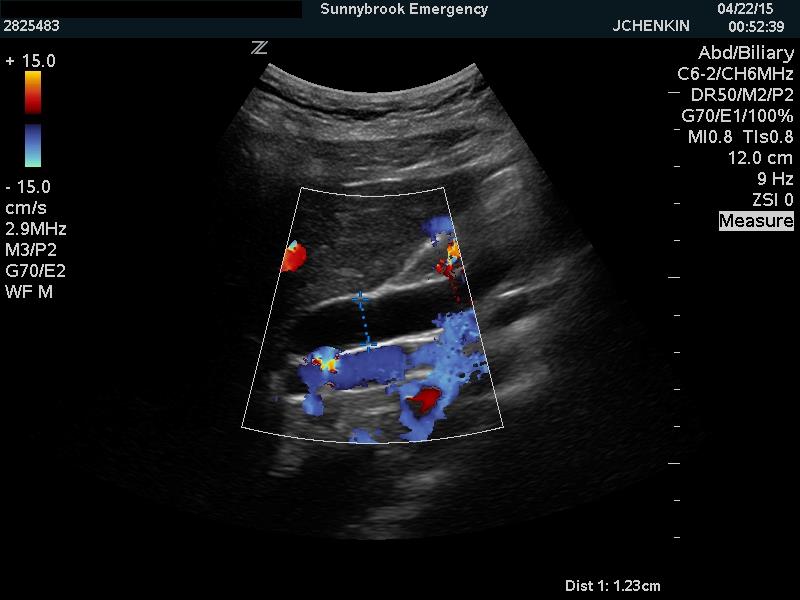 A dilated common bile duct can be seen in the porta hepatis.

By following this down caudally, we can see an echogenic structure within it with posterior acoustic shadowing consistent with a common bile duct stone.

In this clip, a stone can be seen within the head of the pancreas.


The patient was admitted to general surgery with a diagnosis of choledocholithiasis. Radiology ultrasound confirmed the POCUS findings and were also suggestive of early cholangitis.

Assessment of the common bile duct (CBD) is not generally part of ED biliary POCUS, since most patients with CBD pathology will usually have abnormalities on their gallbladder ultrasound or blood tests. However, occasionally a dilated common bile duct can be a helpful finding and can lead to a change in management.

The common bile duct is found anterior to the portal vein in the porta hepatis. It can be differentiated from other vascular structures such as the hepatic artery and portal vein by its absence of flow on colour Doppler. The CBD should be measured from inner wall to inner wall. The normal diameter is lesss than 6mm, or the first digit of the patient’s age (eg. 8mm for 80yo). It is often dilated up to 1cm in patients with previous cholecystectomy.

If a dilated CBD is seen, try to follow it distally to the pancreas to try to visualize an obstructing stone. These require prompt referral especially if there are any infectious symptoms suggestive of cholangitis.

In this case, the finding of a dilated CBD and distal stone led us to avoid a potentially dangerous misdiagnosis of ‘gastroenteritis’. The patient underwent successful ERCP and had an uneventful recovery.