The Meaning of B-Lines

A 66 year-old man presented with 2 weeks of increasing cough, generalized weakness, and decreased oral intake. He has a past medical history of a tonsillar squamous cell carcinoma for which he had received both chemo and radiation therapy. His last treatment was months prior. He was followed by the palliative care service who was managing his throat pain with hydromorphone.

He reported an increasing non-productive cough without fever, nausea, vomiting, or other systemic symptoms. He endorsed severe weakness without any focal neurologic deficit. He denied chest pain and pleuritic chest pain. He was mildly short of breath without orthopnea or paroxysmal nocturnal dyspnea.

He presented with abnormal vital signs: Temp 37.7C, HR 124, RR 18, 118/54, 84% on room air. He was a cachectic man with dry mucous membranes. There was no increased work of breathing. Neurologic, Cardiac, resp, and abdominal exams were normal. There was no unilateral calf swelling or tenderness.

Left hemithorax demonstrated normal A-line patterns with no evidence of B-lines or effusion: 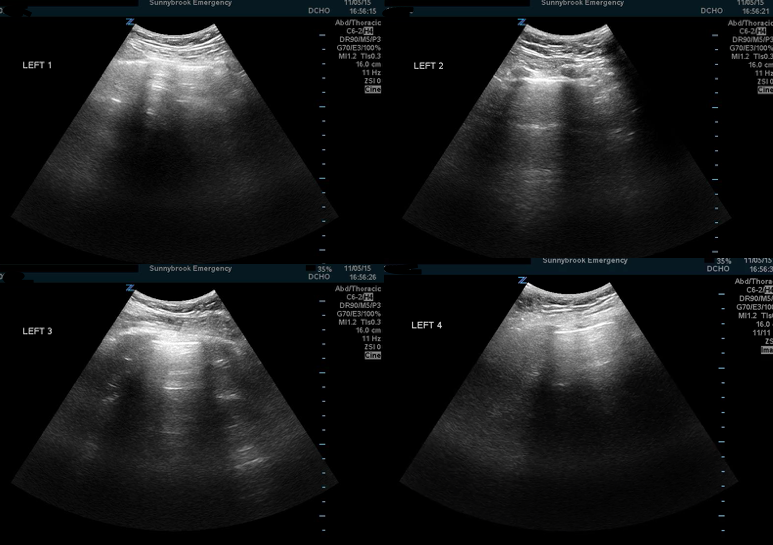 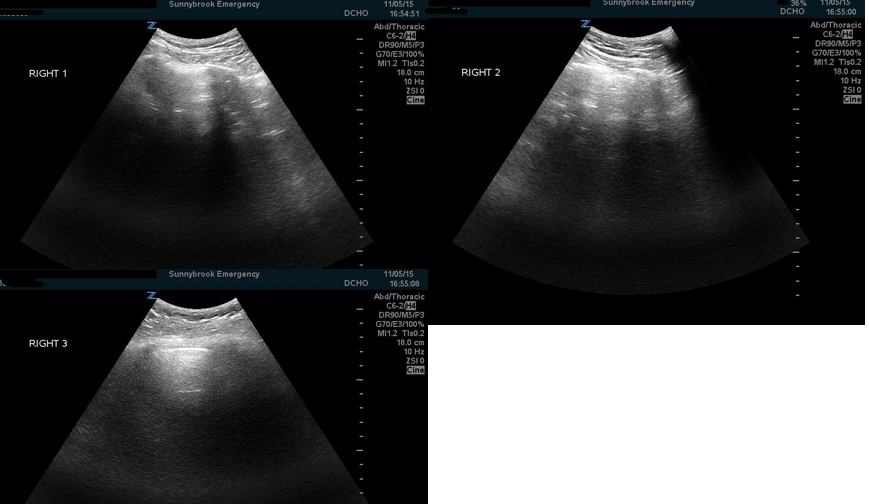 The R4 and R PLAPS region demonstrated evidence of a focal B-line pattern. Note how multiple B lines can coalesce creating a “gigantic B line” also called a “lung rocket”. Also note how the B lines exist in multiple intercostal spaces.

There was a focal B line pattern in the R4 and PLAPS region. There were greater than 3 B-lines in each costal region over two intercostal spaces demonstrating a positive scan and evidence of alveolar interstitial syndrome (see below).

Full septic work up and treatment with IV fluids was initiated. CXR was normal.

Based on ultrasound findings of this focal AIS pattern, cough, SIRS criteria, hypoxemia, empiric therapy for CAP was initiated with ceftriaxone and azithromycin.

A CT scan was obtained to rule out pulmonary embolism.

Our patient had bilateral pulmonary embolisms and resultant pulmonary hemorrhage. He was treated empirically for CAP and was admitted to medical oncology whereafter he was anticoagulated and currently remains in hospital.

Positive region: 3 or more simultaneous B lines in a single intercostal view

AIS is a syndrome and like most syndromes, there is a differential:

Pulmonary Hemorrhage Added to the Differential of Focal AIS!