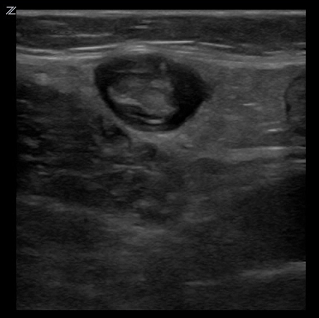 A 57 year old woman presented to the ED with left leg pain and swelling for a week. She had no past medical history, and no risk factors for DVT. On examination there was a palpable superficial cord running along the medial leg from the knee to the groin. This cord was erythematous, warm and tender. A point-of-care ultrasound was performed to examine the region and to assess for DVT.

This video shows the presence of an echogenic thrombus clearly visible in the greater saphenous vein (GSV). We know that it is a superficial vein as there is no associated artery. The vein was non-compressible.

The DVT scan in the proximal leg demonstrates the dilated greater saphenous vein with echogenic thrombus within its lumen. When scanning the sapheno-femoral junction, the thrombus can be seen protruding into the common femoral vein.

This case demonstrates the importance of visualizing the greater saphenous vein at the junction of the common femoral vein when looking for DVT. Approximately 6-11% of patients with isolated GSV thrombosis will progress to DVT (Ghengelis 1996). The risk of progression is higher in patients with proximal GSV involvement compared with distal involvement (24-40% vs 1-4%) (Ascer 1995). Most of the progression will occur via the common femoral vein, while a minority will progress through small perforating veins.

The use of anticoagulants for the treatment of superficial thrombophlebitis remains controversial. A recent randomized control trial found that fondaparinux reduced the rate of DVT/PE or symptomatic recurrence from 6.3% to 0.9% (Decousus 2010) for patients with GSV thrombosis. If deciding not to anticoagulate your patient, you should have them return for a repeat ultrasound to ensure that there is no progression into the deep venous system.