A PoCUS Year in Review – Part 1

I’ve just wrapped up a phenomenal year of POCUS learning and thought I would share some of my cases and accompanying pearls. This is a two-part series. Here are the first 4 take home points, in no particular order.

I was early into my fellowship when a colleague pulled me aside to have a look at a pediatric right hip. I had not yet formally been trained to assess joints but was curious to see why a 9 year old girl without a history of trauma would suddenly refuse to weight bear.

Here is the scan of the affected hip (right): 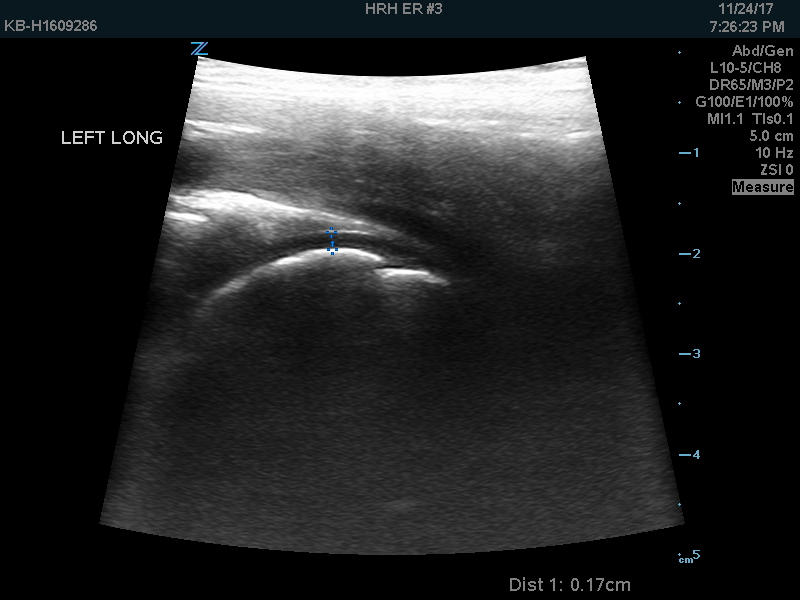 What we saw on the right side was a complex joint effusion. If there is a difference of 2mm or more between bone and joint capsule (when comparing both sides) or when there is an absolute diameter of 5 mm or more in a single hip, this is positive for an effusion. This patient had septic arthritis. She  was transferred to a pediatric centre where she underwent lavage. Take home point here: compare both sides when you can! This is particularly true when assessing for hydronephrosis.

This is an unfortunate case. A 21 yo F collapsed at home. By the time she reached our hospital, she arrested. The history was unclear and the differential broad. An ERP performed a pelvic scan to assess for the presence of an ectopic. Here is what was seen:

A second opinion was requested while ICU was being consulted. The first area we interrogated was the RUQ. Here’s what we saw:

At this time, the consult with ICU was halted. Gyne was emergently requested. An ED laparotomy was performed where bleeding from a ruptured ectopic pregnancy was controlled. The take home point here is this: don’t try to seek out an ectopic. Rather, look for free fluid where it would most likely accumulate and where it would most easily be seen: the RUQ.

How many times have you tried to feel a pulse in a patient who is in cardiac arrest or in shock and you can’t tell whether it’s present or absent despite taking 36+ seconds of palpation? The default is usually to start compressions. What if you could finesse this approach and make a firm call just by looking instead of palpating? The following case illustrates this point: an elderly man collapsed at home; it was unclear whether there was any loss of consciousness and there was little history extractable from this patient with dementia. He arrested while in the ED. While CPR was being performed, some team members frantically called for a cessation of chest compressions when the patient seemed to be moaning and reaching for the compressor’s hands. However, upon halting compressions, the patient would go limp. This cycle continued until the ultrasound was pulled out during the 3rd pulse check to demonstrate to the team that the patient, in fact, had no pulse. The linear probe was placed transversely over the femoral artery and a lack of pulsations was observed by all. We obtained similar views to that when assessing for DVT at the level of the common femoral artery and vein.

4. Look before you poke.

Who would think to use  PoCUS when a large knee effusion is so conspicuous? I’ve learned to just take a peak before I poke. Here’s a patient with years of intermittent knee effusion who in the past had relief of symptoms with aspiration. She presented requesting an aspiration. Here’s what I saw laterally:

And here’s what I saw medially.

It would appear that having this thickened synovium laterally might worsen her knee effusion should I happen to puncture this synovial tissue. Thus, I opted for the medial aspect of her joint. Putting the probe on any body part about to be punctured or drained, etc, is generally better practice. It allows you to estimate depth of tissue to go through before reaching your area of interest and to visualize anatomical structures you may want to avoid along the path of entry (such as blood vessels!)